Xian – The Home of the Terracotta Army

Xian is another busy, crowded Chinese city with a large, new station far from town. Like Pingyao it is also a walled city but unlike Pingyao is completely lacking any charm or fascination.

My memories of Xian are a blur. I didn’t feel too well the day before we left Pingyao and on arriving at the hotel I went straight to bed. I had a temperature, headache, aching body and felt very sorry for myself!!

Carol and Roger ventured out to get me some medicine and had a very successful and memorable visit to the local hospital. They can’t talk highly enough of the service they received from the doctors and staff they saw.

The next day I felt even worse!! The only redeeming factor was the whole day it poured with rain. I stayed in bed and Carol and Roger went out sightseeing. They returned very wet and bedraggled. The highlight of their morning was visiting the Muslim quarter … which also happens to be the final city of the Silk Road.

The next day we hired a taxi as I was still feeling very weak. We started at the Banpo Museum where an early Neolithic settlement is "brought back to life" with its reconstructed houses and ornate earthenware.

We then visited the factory where models of the Terracotta warriors are produced. This visit was a carefully orchestrated sales ploy where one is led from showroom to showroom of Chinese products. Expensive to cheap, furniture to sculptures to trinkets … “discounts” and deliveries all can be arranged.

The next stop was at the excavation sites of the Terracotta Army.  The jewel in the crown of Xi’an’s historical exhibits is this assortment of over 8,000 terracotta soldiers which dates back as far as the third century BC.

The vast army was constructed either because the emperor was terrified of the vanquished spirits awaiting him in the afterlife, or – as most archaeologists believe – he expected his rule to continue in death as it had in life.

The site is well organised but as we decided not to take a guide we probably missed details of the history. Many of signs and inscriptions are in Chinese and the site was seething with mobs of visitors.

It was not quite what I expected. It is still a work in progress. There is  a significant amount of extraction to be done to extract all of the 8 000 warriors, plus horses and the rest of the army.

I left there confused. Firstly, by why an astute leader would commission this work. Believing that this army of wooden sculptures would protect him? And then why it was so important with the authenticity of these sculptures? Why should every statue, on threat of death to the carver, be different?

My thoughts then turned to why now spend so much time and effort exposing all the army? Isn’t there enough already? What else can they possibly discover just by uncovering more.

Maybe it was my state of mind but it seemed that a lot of time and resources were used creating this army and now a lot more resources are being wasted digging them out?

The following day we caught a bus uptown in Xian to see the Great Wild Goose Pagoda.

There was an old man walking with his blind wife playing a “Chinese violin”. I became aware that we had seen a number of poor, old people and I wondered how they were managed by the government system? 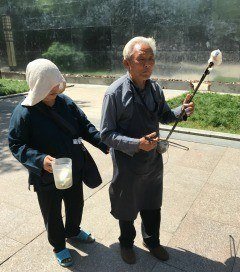 In the grounds we saw a group of female Buddhist monks. I enjoyed a quiet moment in the very peaceful gardens.

It was another very hot day and as we approached the bus stop we realised that we knew the number of the bus to get to the Pagoda but not the bus to get back. Solution - catch a taxi.

My memories of Xian are sketchy but apart from the Terracotta Army I don't think there's much else worth seeing.