We travelled by bus from Uvita in the south of Costa Rica through David to Boquete in Panama.

Boquete is a small town that has for years been highly rated by International Living and other publications as an ideal retirement destination.

Located in Chiriquí Province and situated at an altitude of 1 200 metres (3 900 feet) it is a lot cooler than the lowlands. Some of its landmarks include nearby Volcán Barú. An active volcano and, at 3,475 meters (11,400 feet), the tallest point of land in Panama.

Due to factors like the pensionado program, the relatively low cost of living, the mild weather (no heating or cooling is required), the fairly widespread understanding of English, the high quality medical facilities available in David and the range of lifestyle options it has a large retirement community.

Visitors are attracted to the town by the many hiking and walking trails close to the town.

During our time here we went on a nature hike – Pipeline Trail - with a guide Camilo. He had excellent knowledge of plants and birds. And with his knowledge saw a pair of quetzals and a troop of howler monkeys. Astounded that such small animals can make so much noise!

It was a relatively easy walk all the way up to the waterfall.

From Boquete we took a long but very comfortable bus ride to Panama City.

Here our main objective here was to get a Colombian visa for Carol’s South African passport.

After spending the whole of Friday in and out of the Embassy we had the weekend for sightseeing. 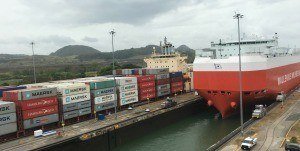 Instead of one of the overpriced tours advertised on TripAdvisor we decided to do our own thing to visit the Miraflores Lock . We took an Uber (I have developed an aversion to taxis and even more so to official airport taxis!) - cost $7.50.

The entry fee for foreign visitors to the Miraflores Visitors Center is $15 per person and is completely worth it. We spent over 3 hours going through the various museum history exhibits and the history of the building of canal and watching a short video.

Finally the real thing getting a close up view of a few vessels going through the lock.

The first ship was a Maersk container ship and next to it was a car carrier returning to Japan. This carrier had a capacity to carry 4 500 vehicles. It barely scraped through with a clearance of only 60 centimetres each side from the canal walls. To keep the ship straight required the power and coordination of 6 guidance vehicles (mules) and 2 Panamanian pilots on the ship.

Next followed a package of 3 small vessels - 2 cruise boats and a yacht. We later spoke to two Americans who’d actually experienced coming through the Canal on a small yacht with other vessels.

From the Visitors Center you can see the Pedro Miguel locks in the distance. These new locks allow ships over two and a half times bigger to pass through the Panama Canal.

In total about 14 000 ships a year go through with charges varying from a few thousand dollars for a private yacht to over a million dollars for the largest vessels. 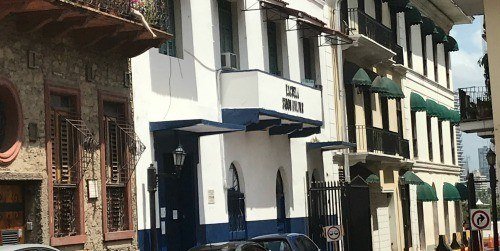 This part of Panama City is undergoing a revival and is now filled with renovated upmarket – read expensive - apartments, restaurants, bakeries and shops.

It is very vibrant and filled with tourists buying Panama hats and craft products.

We left at 6am for the airport to take our flight to Colombia. A $13 Uber ride became a $18 ride and finally turned out to be $32 including tolls and a surge charge.

The cost of a shuttle would have been $25 so this was one not good Uber choice.