The Great Wall of China at Mutianyu

We decided on a tour to the Mutianyu section of the Great Wall. This also included the Ming Tombs and the two disguised shopping visits to a "jade factory" and finishing with a "tea ceremony".

The latter two “sales promotion” stopovers which organised tours around the world  are famous for.

We were collected from our hotel by the tour guide and after a short walk and a short wait were picked up by the tour bus which already included other guests. We bus wound it's way around the city to collect the final group … six very entertaining young men from Mumbai. Whose laughter and merriment certainly brightened up the quieter moments through the day.

It was a mixed bag of people ... including a retired American woman who had been a criminal lawyer, two young women from Belgium and one from Azerbaijan.

Our tour guide operated in two modes: Absolute silence or rapid fire speaking over a very distorted loudspeaker system. Over the day, she got the main organisational elements right and we completed the tour schedule on time. The Great Wall at Mutianyu was the pinnacle and didn't disappoint. 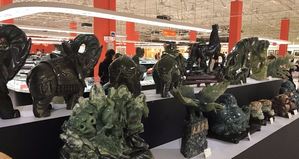 Our first stop was a jade factory where there were a few craftsmen working on jade pieces. The manufacturing of the sphere within a sphere … with up to 9 levels was fascinating.

However, this was just the front to a very large showroom filled with many eager sales people who were glad to offer a “30% discount” on any purchases.

Jade is extremely highly prized in China as a “low grade” substitute for diamonds.

On this, our second, day in China we were introduced to the ridiculously priced cappuccino coffees - more than double the South African price for the same thing!!

From here it was off to the Ming Tombs. The final resting place of some Emperors, their wives and often many unfortunate concubines and servants. These tombs are austere and generally not very impressive.

So the visit was interesting but quite short.

Back in the bus we wound our way up to the village at Mutianyu for a delicious lunch. And something you quickly get used to in China. No delay … eat and go. 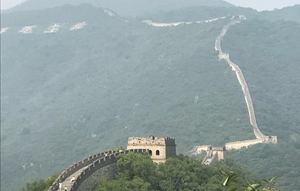 The Great Wall of China

After lunch our guide organized the tickets for the cable cars - the youngsters electing to do the open cable car to the top and the toboggan ride down. With the older folk selecting to ride the closed cable car up and down. The price (about US$18 per person) was not included in the tour price. This was another lesson we learned ... with cheaper tours there will always be some unexpected add-on.

Once at the top we walked (a very gentle stroll) along the wall. There were many visitors and many stops for photographs and to negotiate the narrow and tricky steps. In some places it requires extreme care as a slip could be very messy! We spent a couple of hours traversing the wall before taking the short cable car ride down to the town.

This wall is really impressive. Awe inspiring. The high point of the day.

As we were returning to Beijing we were caught in a traffic jam so our enterprising guide and driver decided on a backroad short cut. However, as the bus was negotiating the last 50 metres down a very narrow side road the top of the bus snagged an electric cable which was strung across the road.

A very irate Chinese lady emerged from a house and refused to budge from the front of the bus. She reinforced her position by placing her motorbike in the middle of the road. There was some heated conversation between the bus driver and the lady. But no resolution.

The only way out was back the way we came. But before we could go anywhere the cable had to be dislodged from the bus roof. Showing great agility and flexibility one of young Indian men eased himself through a window and on to the roof before carefully freeing the wire. This resulted in an angle iron fixture being pulled out of the wall. And more shouting and angry words.

Reversing slowly with an occasional scrape against the wall we eased our way out of the conflict zone and continued our journey. 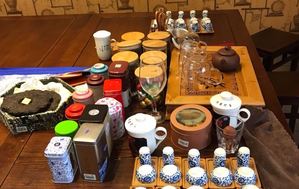 The final stop was for a tea ceremony. It was interesting and most of the teas were delicious. But the whole process was just a front for selling some exorbitantly priced tea. So like at the jade factory we didn’t buy anything.

The day was enjoyable and highly recommended. The price per person (including all entry fees and lunch) was CNY260 (USD40) and on top of that was CNY120 (USD18) for the cable car.