After arriving early in the morning, checking in and sorting out our initial hassles we decided to do some sightseeing. It was very hot and very muggy ... and we'd had little sleep on the plane.

Our hotel was close to Tiananmen Square so we decided to start there.

On the way we encountered the first of many subsequent “security checks”. All of which seem very cursory and more a reason to employ people than to do anything to improve safety.

As we walked through the Square with the thousands of other visitors Carol concluded that it must have been a public holiday … it wasn’t. Just a normal weekend where tens of thousands of Chinese flock to see the Square and the Tomb of Mao Tse Tung. 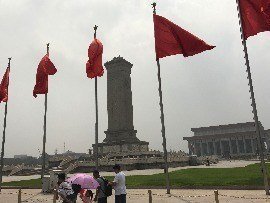 Entombed in a crystal coffin a constant stream of people file past making donations of flowers. Strictly observed by the always present, stern face of authority.

There were crowds of people waiting outside the tomb as there is a “no bag” policy. Together with the notice for “No Spitting” one realizes it is a place of reverence. In some cases, people are brought to tears which seems to be beyond belief when one thinks about the number of people who were displaced and eliminated during his rule.

As I’d already seen this I did the bag duty while Roger and Carol  joined the long line of people waiting.

Out in the sun it was hot. Very hot. I managed to find a sliver of shade and waited with the other “bag watchers”. As I stood there I thought about the fruitless protest in 1989 when possibly thousands of students were mown down by tanks. 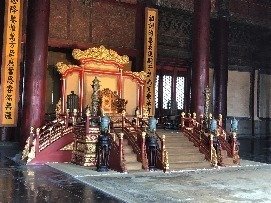 We then made our way across the Square to the Forbidden City. Apart from being very large and opulent I felt it has lost a lot of its charm since I visited there in the early 1990’s. Over commercialized, too crowded and expensive.

We used the headphone guided sightseeing tour which was a less than satisfactory experience … and expensive.

After wandering around from palace to palace we decided to make our way back to the hotel. The day culminated in a very unpleasant taxi ride and a longer walk than when we took the taxi … but this last leg was fueled by adrenaline from the unpleasant experience.

Beijing is characterized by black clad policemen everywhere. Some armed with rather ominous U shaped devices to restrain any uncooperative person.

With all the restrictions on social media. Constant elimination or suppression of any dissent it is clearly a tightly controlled authoritarian state. A model that America appears to be emulating?